On April 21, 1865 Abraham Lincoln’s mortal remains were placed on a train to make the 1654 mile journey from Washington D.C. to Springfield, Illinois. His funeral procession lasted 14 days and his open casket was viewed by more than 1.5 million people.

Despite the astounding number of people that viewed Lincoln’s body, only one photograph is known to exist depicting his corpse. This photo was discovered in 1952 by Ronald Rietveld, then a 14 year old boy who was leafing through a collection of papers belonging to Lincoln’s secretary, held at the Illinois State Historical Library (click here to view the photo). 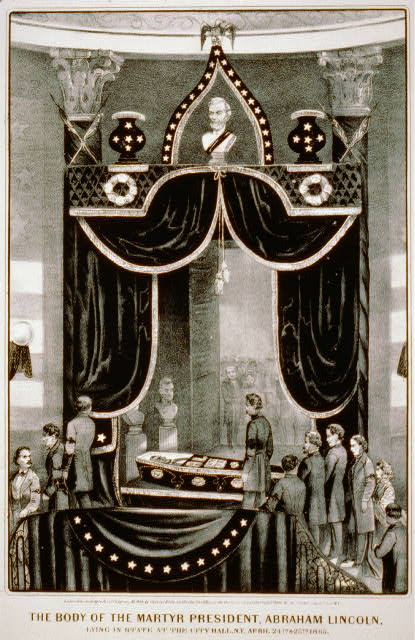 Currier and Ives sketch of Lincoln’s casket – Library of Congress

The photograph, taken by Jeremiah Gurney, Jr. shows the embalmed Lincoln lying in state in New York City on April 24, 1865. An excellent 2009 History Channel documentary, “Stealing Lincoln’s Body” details the discovery of the photograph as well as a counterfeiting ringleader’s attempt to snatch Lincoln’s body from its tomb in Springfield, Illinois.

Memorial portraiture, or “memento mori”, the practice of capturing the image of the deceased, was once accepted custom. During the 19th and early 20th century, funeral photos were commonly taken as the final memento of one’s life, often showing mourning family members surrounding the coffin.

As our attitudes towards death and dying have shifted, memorial portraiture is largely a thing of the past, sensationalistic acts not withstanding, such as the leaked photograph of Whitney Houston lying in her casket recently published by the National Enquirer. Whereas mortal remains were once lovingly cared for and preserved by family until time of burial, we now outsource this task to an entire industry of undertakers, and funeral homes.

The shift in attitudes towards memorial portraiture is a bit of a loss for the genealogist. Family photos are often a first step in identifying relatives. Major life events that bring families together generate the photos that become the critical clues and starting points for future family historians. After all, not everyone can make it to a confirmation, graduation or wedding of a loved one, but just about everyone makes it to the funeral.

Just as a memorial service can be thought of as a celebration of someone’s life, so can funeral photographs and albums be thought of as ways to capture and honor the memory of a loved one. While open casket photographs may not appeal to everyone, a photograph of funeral attendees gathered around the burial site or a guest book where attendees can sign their name and write a favorite memory of the deceased will be meaningful keepsakes for future generations of family historians.

Shown here are funeral photographs in my family’s collection.